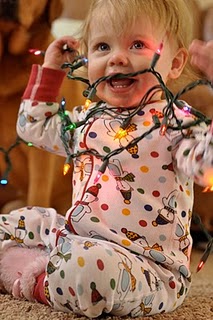 Today is my beautiful little granddaughter Abby's 1st Birthday!  This picture is from her birthday post on her mommy's blog.  Isn't she a cutie?  And such a funny sense of humor.  The wonderful thing about this girlie is that she KNOWS she is being funny, and is just waiting for you to crack up.  She always has a joke up her sleeve.

It wasn't so long ago that she looked like this... 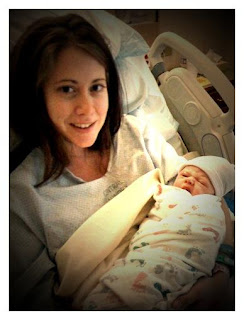 Amazing what a year can do.

This lucky Grandma got to watch her open one of her birthday presents.  She is great at ripping the paper off presents.  It seems to be a skill kids are born with - or just intuitively know.   As my dad used to say, "She's one sharp little cookie."

Anyway, Grandma had fun sewing for the birthday girl.  A couple of things didn't get finished, but here's one that did. 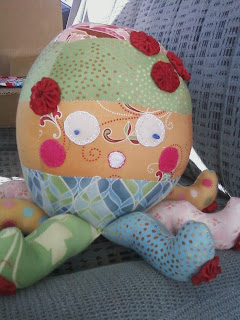 Her name is Oopsie, and she is an octopus.  The recipe was on Moda Bake Shop a few months ago, and I couldn't wait to make her.  It's a recipe by Melanie of Melly and Me.  The recipe is here.  So fun!  She was one of the projects I finished at the Stitch-In last Saturday.  Abby's mommy says Abby carries Oopsie around in her teeth.  Maybe that's what she has feet for.

The Last Ornament of the Season 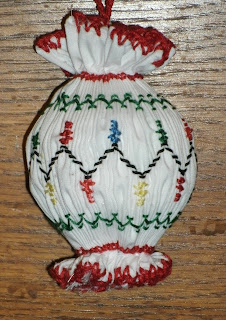 I started this ornament at the Stitch-In and finished it tonight.  It was really intended for another ornament exchange, but I didn't get it finished in time.   My friend Julie was so disappointed that she didn't get my smocked ornament in the Stitch-In swap, but she was number 4 and number 3 took my offering, so maybe I'll give it to her.

This is an Ellen McCarn pattern with adjustments to make it fit the ornament idea.  In any event, I enjoy making them.  They are easy and fun and they go quickly.

So, Merry Christmas, all.  Happy crafting!
Posted by prsd4tim2 at 12:21 AM No comments: 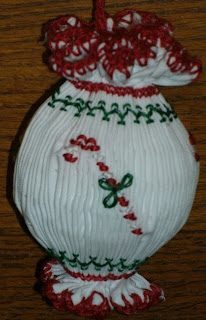 Way back in the 60's, students sometimes protested by staging a sit-in.  They would invade a school administration office and sit there until their demands - whatever they were - were met.  Tonight I participated in a stitch-in.  Luckily, with this event, there were no demands made - just a great Christmas dinner, an ornament swap, and 6 or 7 hours of stitching and chatting.  I only knew 2 other ladies who attended (both from work) but it seemed like the other ladies and I had so much in common, I never felt like an outsider.

Some of the ladies were working on very elaborate projects.  One was making a plaid pillow - by stitching all the plaid herself (my friend Julie and I looked at each other and almost simultaneously said, "Wouldn't it be easier to just go to the fabric store?"  It is just possible that we have missed the point).  Another was making a 12 Days of Christmas Sampler.  Everyone had a project to work on.  I took Christmas gifts to finish.  Got some things finished, too.

While we were there, some of the ladies were talking about finishing their ornaments by making their own cording.  It seemed very complicated and like it was a lot of work.  (Here again, Julie and I looked at each other and said, "Don't they sell cording at Jo Ann's?  Again, I think perhaps we missed the point.)

The picture above is the ornament I made to swap.  It is very much like the first candy cane ornament I made, but I like this one better.  I exercised a little creativity, which is something I have trouble with the first time I make something, and added a little color.  I think the green jazzes it up a little.

I'm not sure the recipient liked it.  It was very non-traditional for that particular group of women (well, considering that the stitch-in itself was held at a needlework store, I guess that's not too surprising).  They were all working on counted cross stitch and needlepoint and other kinds of traditional embroidery.   She said she liked it.  And my friend Julie said she wished she had gotten it.

Here is the ornament I received, made by Shirley R.  It is beautiful.  And it is much more traditional for this particular group.  I love the beading, and the buttons are adorable.  I love buttons.  I was very happy with my swap. 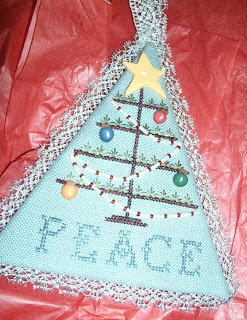 Here is a close up of the detail.  The flash made it a little weird.  The color is almost a seafoam green and the beads are red and white.  Still, it's pretty cute, huh?

I have one more ornament to make for an ornament swap, and I actually started it at the stitch in.  It will be similar to the candy cane ornaments, but this one is Christmas lights.  Can't wait to see how it turns out.
Posted by prsd4tim2 at 11:06 PM 1 comment:

I received both of my ornaments from the Flickr swap today.  They are awesome.  And let me just say, it is so refreshing/exciting/great to get fun mail.  Really makes a blah day special.  Say what you want about "snail mail", but try getting something like this via email!

The above ornament is from freidazzzzz.  It is a beaded Christmas tree with buttons for the topper and trunk.  It is quite small, but very cute.  I have all but decided to only put up a mini tree this year (if I put up a tree at all) so this will go perfectly on said mini-tree.  It came in an adorable little box, all wrapped in tissue paper.  So fun!

The other ornament came from mandalin18 all the way from Australia.  I was so excited by that fact that I posted a photo of the package that had the sender's complete address showing.  What a dummy!  Anyway, the moderator pointed it out to me, so I took another photo to post.  I had to leave the "Australia" part visible, though.  I don't think I've ever gotten mail from that far away before.

Anyway, it was the cutest package, all wrapped in tissue paper and closed with stickers.  Then, inside was this cute Christmas cone ornament.  What a fun place to hide a surprise, like a gift card or piece of jewelry.  It reminds me of the May-day baskets we used to make when I was a kid.  We would fill them with flowers and hang them on someone's door knob, then ring the bell and run away.   Anyway, inside, was a package of Cadbury chocolates called Snow Babies that I have never seen here in the US.  I hate to open them because the package is so cute.

Thank you freidazzzzz and mandalin18 for making my day!
Posted by prsd4tim2 at 11:30 PM 1 comment: