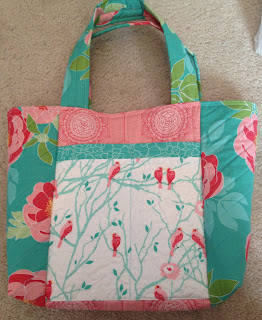 I have to admit that I had a hard time deciding what to do with this year's Riley Blake challenge  using The Cottage Garden by The Quilted Fish.  I wasn't able to get in on the fabric giveaway (it was GONE by the time I got home from work) and my LQS only had the green/pink colorway, which just didn't inspire me very much.  To top it off, I had forgotten when I bought the fabric that I had split the half  yards with a friend and ended up with fat quarters - which is fine, except that with so little fabric (and the requirement being for all Riley Blake fabrics) - I had trouble deciding what to do.  I've seen some really cute things made from this fabric, but honestly, I was stumped.

In the end, I fell back on this tote I designed at Sewing Summit in 2011 - the One Hour Fat Quarter Tote.  I used headliner foam instead of fleece to line the bag, and made it just a bit larger than the original design.  I used a tab of color at the top of the pocket that wasn't in the original design, and I used a Riley Blake gingham from another line for the lining.

Overall, it turned out pretty well. 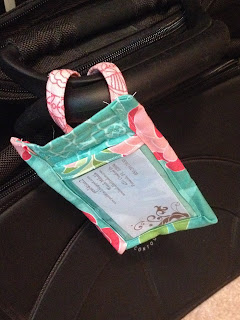 One of the requirements was that you do something you've never done before.  I had some quilted pieces left over from the tote, so since I've done so much traveling this summer, I decided to make luggage tags.  Having just returned from the last trip of the summer, I can testify that they worked pretty well.