Today's adventure was the quitessentially Northwestern - Western Washington State Fair, more familiarly known as the Puyallup Fair. Dear Sister and Dear Niece, Beautiful Daughter #2 and I headed off for The Fair first thing.  I hadn't been to The Fair since I was expecting Handsome Son, so you can imagine that it had changed a lot.  Admission was free if you brought canned goods for the food bank.  Dear Sister was really glad to get those out of her bag!

We perused the commercial exhibits.  No Ginsu knives this year.  Too bad.  For $5 (or have they gone up? - maybe even $10??) I would have bought one for Beautiful Daughter #2's kitchen.  They are so versatile.  When Wonderful Husband and I were first married, we would go to the fair just to listen to the Ginsu knife salesmen.  We bought too many knives, but it was always great fun to listen to their schtick.  Hey - maybe I'll see if I still have some of those!

Yours truly drooled over the new sewing machines Which embroidery machine would I want if I could have it???  Pfaff?  - I love mine.  Great for quilting.  (I wish I had learned to use the computer embroidery feature on mine, but it is on a 3-1/2" floppy and works on MS-DOS, if you can believe it.)   Bernina?  They seem pretty cool.  Brother?  I don't know.  Embroidery machines have come a long way since 1992.  Dear Sister has a Viking.  She really loves it.  Maybe I need one of those....  I would love to have a quilting machine, but where would I put it?  I guess I could put it in the living room instead of the couch.  Wonderful Husband wouldn't mind (LOL) 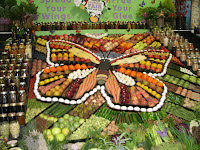 We wandered by the fruit and vegetable exhibits.  Each year, it seems, there is a competition for the best display, and the winner is chosen by the fairgoers.  They were all amazing, but this is the one that got my vote.

A must-do was the Scone booth.  The line was LONG and Beautiful Daughter and I took turns waiting in line.  Dear Sister thought I was nuts, and Beautiful Daughter was a champ, taking it on faith that her mother knew what she was doing - or at least that she was determined, and there wasn't much she could do about it.  I do admit that Dear Sister's scones are better (much better) but these are traditional fair food, and TRADITION MUST BE OBSERVED!.  I even bought some scone mix to bring home.

Beautiful daughter bought some fudge.  It was yummy, too.

We managed to find the youth crafts booth, which included FFA and 4-H, but we never did find the quilt show.  Some of the youth quilts were amazing.  I was really glad to see that young people are enjoying quilting, especially since both my girls seem to enjoy it now.  It's gratifying.  Maybe someday, they'll enter a quilt at the fair.
Posted by prsd4tim2 at 6:44 PM