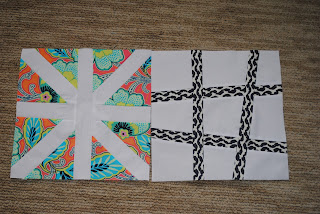 Monday was MLK day, and for us bankers, that means a day off.  I sometimes joke that I went into banking for 2 reasons - Weekends and Holidays off. 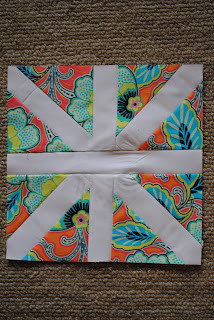 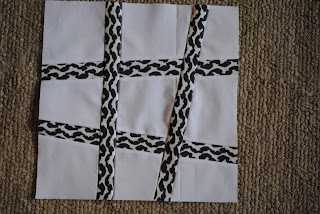 These two blocks were the January BOM from the Free Craftsy class.  The hostess is Amy Gibbons, and the instructions are easy to follow.  The blocks are very easy and fun, and I even learned a little trick about lining up the sections so that they (mostly) match. 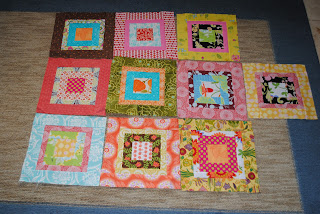 Then I made 10 Bento Blocks.  Have you ever gotten a bunch of blocks put together and realized that the center block was the wrong size - and therefore the entire block is out of whack?  Well, that's what happened to me. Between the computer and the cutting table the center block gained half an inch.  Consequently, the whole durn block was the wrong size. 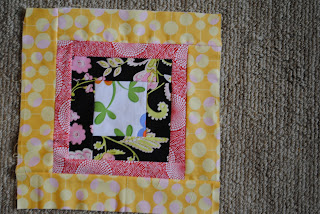 Being only somewhat OCD, I took all the finished blocks apart and put them back together.  It wasn't until this morning on the way to work that I realized that since they're going to be sliced anyhow, I could have just cut 1/4" off each side and the blocks would have been fine. More importantly, I would have saved about 4 hours.  Oh well... 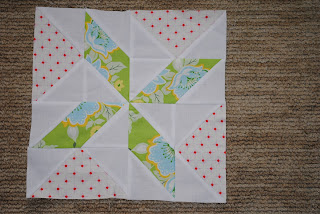 I also made a replacement block for one of my swap-mates in the 3x6 bee.  I lost her block 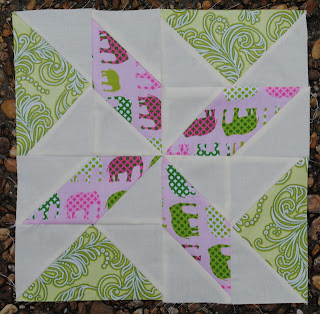 and never have been able to find it.  I was worried that although this block matched her color scheme, she had asked for 30s repro squares and this one really didn't fit that model.  I think the replacement block does better.  Nicey Jane seems retro to me.  Maybe someday I'll run across the lost block and turn it into a pillow or something. 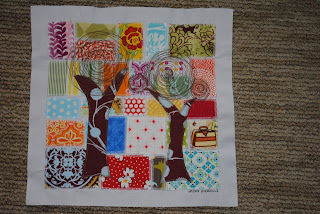 Then I made this ticker tape block for Kritta22 in the Sew Fun Bee.  I've been dying to try this technique ever since I saw this block and this one.  The ticker tape was fun, but I found it a little tricky to get the pieces the right size.  I finally ended up cutting with scissors, which I very seldom do.  Instead of straight stitching, I zig-zagged the pieces onto the background.  I hate the idea of the block raveling apart.  Still, that raw edge look is so popular....  I'm not sure if the circles at the top are dark enough, but I was afraid the fabric would come apart from all the stitching.  It actually started to bow up in the center of the circles.  Anyway, I hope she likes it. 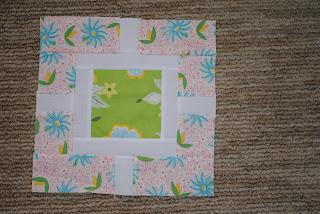 This Garden Gate block was super easy and fun.  It was requested by Alisha in the Fall Bee. 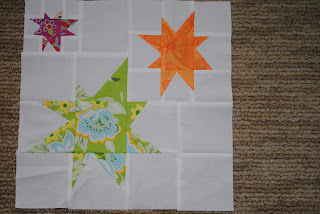 And finally, I completed this Stargazing block for Cindy in the Sew and Bee Happy Bee.  The directions said that you could make it super scrappy by having each point of the star a different fabric, but frankly, I just couldn't wrap my mind around all that scrappiness.  It gave me a headache the first time I attempted the block, and I ended up going to bed early.  Once I decided that I just wasn't clever enough to do it that way, I had a lot of fun with it.

Of course, there was lots more that I wanted to do on the weekend that I didn't get to, but all-in-all, I am satisfied with my progress.  This weekend, I plan to sandwich a couple of quilt tops and maybe even try to quilt them, if Penny Pfaff will cooperate.