The Dresden Pillow - A Progress Report 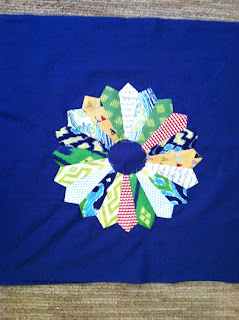 This was a busy weekend in the prsd4tim2 studio (can I really call that messy corner I sew in a studio? - nah, not the real me!) working to meet the swap deadlines that are approaching.  I am glad to report that I have made good progress and that all five (count them - 5!) projects are well underway now with only finishing touches to be added.  (I think that it was self preservation not to actually count them accurately ahead of time!)

I've been reading other blogs again lately, after something of a hiatus, and I noticed that I really like posts where the crafter describes her creative process.  So, at the risk of being unutterably dull, I thought I might try a post that outlines how I go about creating.

Do you have a "vision" of what your project will look like when you begin?  Do you plan everything to the smallest detail before you make the first cut?  I don't.  My projects tend to evolve with only a sketchy notion of where I'm headed.  This Dresden pillow is a case in point.

I hand stitched it onto some navy Dear Stella solid that matches the navy in the Dear Stella prints exactly.  {imagine that!} 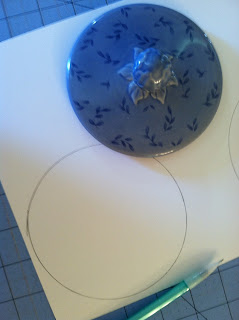 Then, using the lid to my sugar bowl, which seemed to be just the right size, I cut a circle as a template for the embroidery I did last week.  Do you use random kitchen items as templates too? 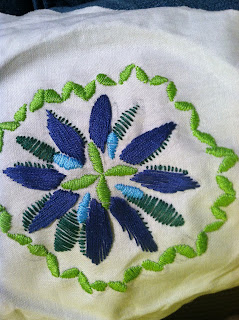 I used Anna Maria Horner's tin foil method to press the embroidery into a crisp circle, trimmed the edges, and hand stitched it to the center of the Dresden. 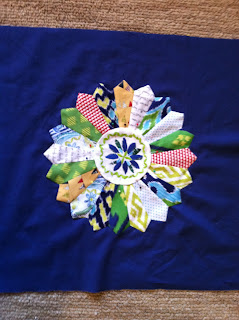 It's coming along, but not there yet. 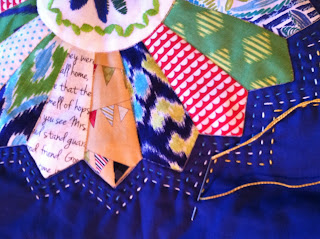 So I added a little hand quilting to the mix.  When I was younger, I hated handwork, although I did dabble in embroidery from time to time.  But to actually construct something by hand was unthinkable.  I simply didn't have time.  Lately, though, I quite enjoy sitting down with my needle and peacefully stitching.  It seems to calm my soul. 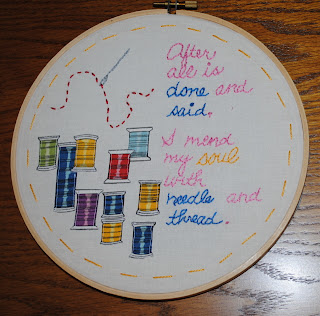 It reminds me of a poem I did as a hoop a year or two ago.  I may have to do one of these for myself. 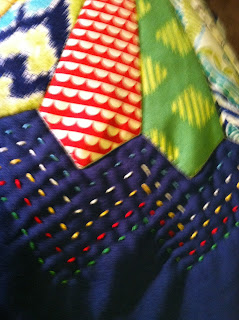 I quite like the effect of the hand quilting.

[On a totally different subject, I lost my favorite needle while I was working on this project.  Alas, I have swept and vacuumed to no avail.   I received the needle in a cute little needlebook I received in a swap, so I don't know what kind of needle it was.  I have been frustrated by needles for awhile now - I must hold them in a death grip or something, because before to long they are bent and useless.  I even emailed the girl who made the needlebook, and she didn't know what brand of needle it might have been, but it was great.  I used it for several weeks and it wasn't bent at all.  Do you have a brand of needles you like - that hold up under strain, sweaty fingers, and just plain overuse?  If so, I'd love to know what kind.  I'll buy a boatload of them!) 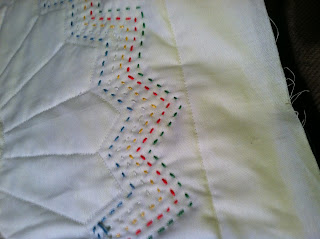 I almost like the inside as much as the outside - except for the knots.  Normally I would bury the knots, but these won't show.  I guess I could have done it anyway.  But I didn't. 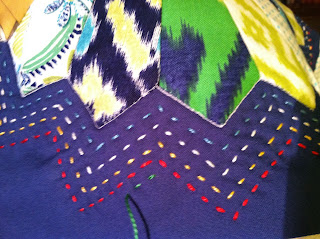 So, tomorrow, a picture of the finished pillow and maybe a look at another project or two that are at the nearly completed stage.