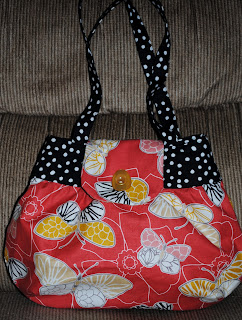 I've been struggling for months about what to make for my sister for her birthday.  You might think this was good planning, except that her birthday was in March.  Yup, I'm more than 3 months late for that event.  What a lame sister I am!

The problem is that I have already gifted my sis with at least one of most of the things I generally create.  She has placemats and table runners and tote bags and pot holders...

So what to make the girl who has everything?

Luckily, Purse Palooza was circulating around blogland about the time we went to South Carolina for WH's surgery (and yes, that is a long, long tale for another day!)  WH actually suggested that while I was there, I should check out the quilt stores in the area.  Can you believe it?  Is he a champ, or what?

So in the pouring rain, we tooled around Columbia and visited the two quilt stores my friend found for me.  One was huge, with tons of beautiful fabric, lots of patterns and tools, and a very helpful staff, but for some reason, I didn't buy a thing.

The other was {literally} a hole in the wall.  It was on the back side of a strip center, and the GPS said I was in the right place, and I still couldn't find it.  I finally called from the car, and the owner directed me around to the back.  I was a little disturbed by the smell of cigarette smoke in the air.  It was a real turn off, in fact.  And the selection was OK.  But I did find a couple of things I liked.  And thankfully, the fabric didn't smell like smoke.

I found this butterfly fabric which I think Dear Sister will like.  It's got kind of a Japanese vibe to it. The pattern is the Pixie Handbag by Keyka Lou (now Michelle's Patterns).  It was one of the semi-discontinued patterns, and was only $3.00 or something like that.

The pattern was really easy to follow and went together like a dream.  Honestly, the whole thing only took me about two hours. 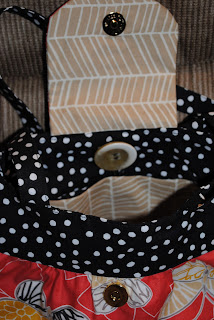 I put on my first magnetic snap, and even that was easy peasy.  I used a hair tie for the elastic loop for the button on the pocket.  I got 100 hair ties for $1.00 at the dollar store last Christmas, so that was a bargain. 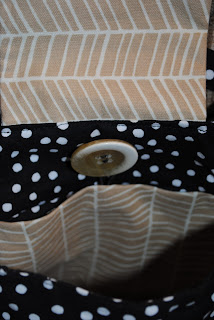 I bought this beige print for the inside.  I only bought 1/4 yard , and I wished I had bought more.  The more I see it, the better I like it.  The black polka dot was off the remnant table at JoAnn's, but I really liked it with the butterfly print.  The button was actually of the clearance table at JoAnn's so it was pretty inexpensive also.

My only real concern with this purse is that even though I made the large version it is fairly small.  I don't this Dear Sister is into big handbags, but if she carries much more than wallet, keys and phone.  I hope that's enough.

So Dear Sister, Happy Birthday (three-and-a-half months late!)
Posted by prsd4tim2 at 6:38 AM