I worked on bee blocks this weekend.  I'm trying to get a head start because I'll be out of town next week, and won't have access to a sewing machine.  I wonder if I will go through withdrawal.  Lately, I've been feeling that it is kind of an addiction.

This block is for Nicky in the Sew & Bee Happy bee.  She is doing a quilt using quilting words.  My word was "QUILT".  It was funny, I was looking at my list the other night and I had written "Quilt Block" and I wondered what quilt block I was thinking about.  When I looked and saw that my word was Quilt, it made me laugh at myself.

Anyway, Nicky has a mini-tutorial on her blog, but I didn't really follow it.  She did say that it was like putting together a log cabin block, so I just kind of ran with that idea.  I have to say, my seam ripper and I are much better acquainted now.  Since I didn't know what I was doing, it was hard to do it right the first time. 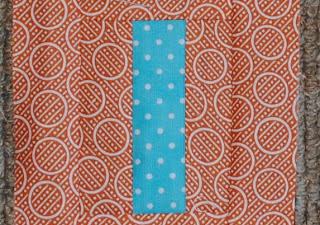 "L" was naturally the easiest letter.  I cut each strip 1-1/2 inches and sewed an orange on each side of the aqua.  This was also the basis for "I" and "T". 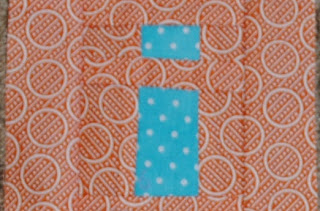 For "I", I just inserted a narrow piece of orange in between the two sections.  The orange piece was about an inch wide, so it finished 1/2". 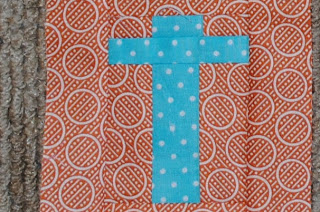 For "T", I sliced it apart and inserted a piece about 1" for the cross-piece.  I tried a 1-1/2" piece, but it was just too wide and didn't look right, so my seam ripper and I went at it again. 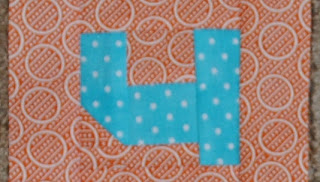 "U" wasn't difficult, but again, it was trial and error to get the look I wanted.  I finally sliced off the corner and added a piece of orange at the bottom before I added the right side so it would have a pegged look.  Here is where the log cabin idea came in - and no seam ripper this time.  Yay! 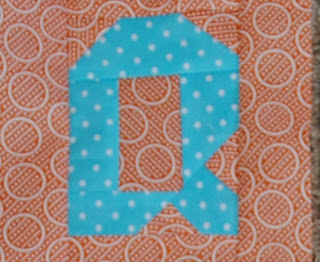 "Q" was the trickiest of the letters, and I made several attempts at it before I was satisfied.  As it is, it's still a little wonky, but none of the other letters are too precise either, so I think it works.  In fact I kind of like it this way.  Getting the tab at the bottom gave me fits, but I finally worked it out.

I can see a lot of uses for this block.  Wouldn't it be a cute banner for your sewing room?  How about a mini quilt, maybe decorated up a little?