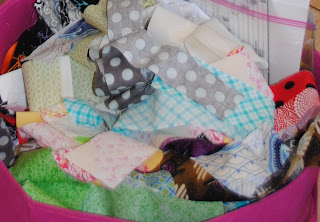 It has been a really long time since I've done a Scrapbuster Saturday, and believe me, it was time.  My scrapbasket(s) are overflowing!  I'm participating in the MSBBS - or for those of us who require vowels, the Mini Scrap Basket Block Swap.  The goal is to make 6-1/2 inch string blocks and swap them.  I missed the deadline for the last swap.  I think it was April 15, and things were just crazy, with 2 trips to Utah in 3 weeks and a new baby grandson.  I just never got the blocks made.  This round the deadline is June 10.

I'm even a little early this time! 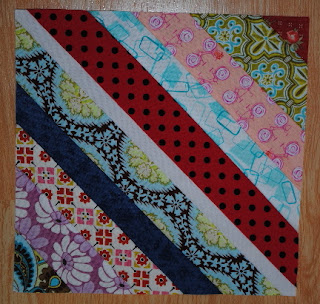 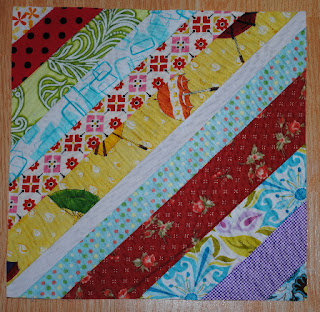 I love the look of string quilts, but I've only made a couple of string blocks before today - once for a swap and once to contribute to Val's Heroes quilt.  The above blocks were the ones contributed to the Heroes quilt last November. 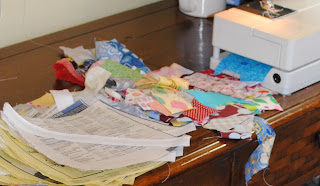 But today, I was determined to make a whole bunch of blocks and at least make a dent in the scrap basket.  I cut the paper backs from a mini phone book that showed up at the house a few weeks ago.  Don't bother looking for the A's or B's.  They're not there any more.

Then I dug through the scrap basket and pulled out all the strips left over from other projects. There were a passel of them. 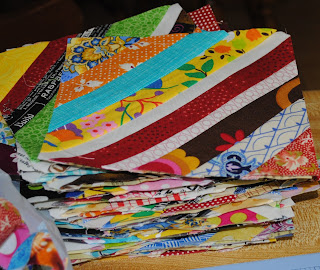 I made 48 string blocks and didn't have to cut a single strip of fabric, although I trimmed a few.  About half way through I decided that the blocks looked better with narrower strips.  The jelly roll strips were a bit too wide for this project. 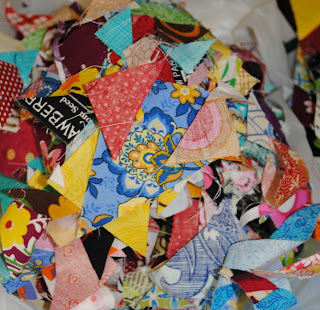 When the blocks were done and pressed, I trimmed them just outside the paper foundation.  This is the bag of scraps from trimming.   Pretty, no?  And pretty huge. 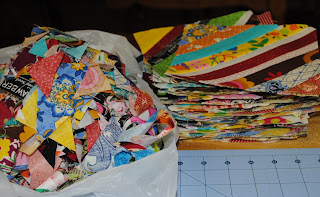 You would think that with all this activity, I would have made a real dent in the scrap basket, wouldn't you?  Well, not so much.  It barely looks different than before I started this morning.  Maybe a bit tidier, but not a lot of additional room in there.  I obviously need another scrapbuster project very soon. 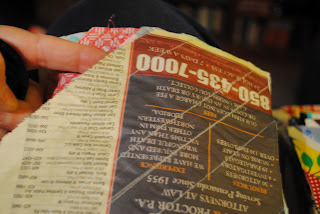 Once I finished all the blocks, I sat down and watched Tom Hanks and Meg Ryan in You've Got Mail on the tube.  It's a good thing I had something else to do, because pulling the paper off the block is truly a mindless task and a pain in the neck.  Is the paper really necessary?  After about 30 blocks though (ok, maybe not quite that many) I figured out that if you "pop" the block before you try to remove the paper it tears the paper at the perforations and the paper then comes off a lot easier.  Live and learn. 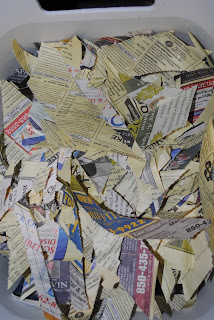 Here's the other pile of scraps - paper scraps.  You would think I would have used at least that much fabric, wouldn't you?

So, one more project done.  I'm not sure I'm going to swap all 48 of them - some of them will be hard to part with.  Nothing wrong with keeping some of them, right?
Posted by prsd4tim2 at 11:52 PM