Look what came in the mail today!

What is this, you ask?  This is a Newell Pleater for smocking.  Now I can make my own pleated panels out of any fabric I choose.

A couple of weeks ago, I finished two smocked ornaments for the Flickr Handmade Ornament Swap organized by Locodowo.  I am also a member of the Learning to Smock Yahoo Group.  The members of this group helped me improve my smocking when Beautiful Daughter #1 asked me to make Abby's blessing gown.  (I love to lurk on the site and see all the beautiful things people make, so when I made the ornaments, I shared them.) 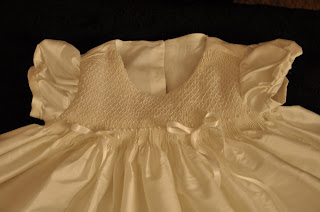 I was grateful for the advice on the gown.  And honestly, it turned out better than I expected. It really was lovely.

Then, for the ornament swap, I smocked these two ornamments. 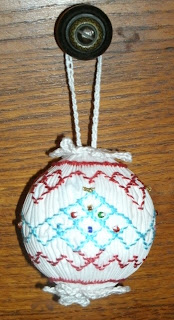 I have been buying my pleated panels at Derrell's, the only heirloom sewing store in the area.  In fact, Mary at Derrell's pleated the ivory silk for the blessing dress.  But, when I finished the second ornament, I went back for more pleated panels and they were out of stock.  And I went back a week later, and they were still out of stock.  And then the third time they were still out.  Frustrating, to say the least.  Finally, I happened by on a Saturday morning just as Mary was pleating something for someone else.  I waited until she pleated my two little panels so I had something to smock.  I plan on a couple more ornaments and maybe something for Abby's first birthday. 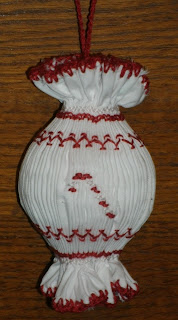 Anyway, in my frustration, I commented on the Yahoo group that I had been unable to make any more ornaments due to lack of materials and a couple of days later this nice lady emailed me and offered to sell me the above pleater at what I think was a great price.

I know that they don't make the Newell pleater any more, and I also know that it doesn't have as many rows as some pleaters.  But needles are still available for it , and I generally only smock 10 rows anyway.  Except for the blessing gown, where I think I smocked 14 rows.  Anyway, it should fit most of my needs, and if I only smock a few things, it has paid for itself.

It came with the manual and extra needles.

Now, I just have to figure out how to use it.